Another Christmas come and gone. This is my favorite time of year. Even here in southern AZ, without a snow covered ground, there is still a crisp bite to the air that lets me know it's winter. Time to bundle up, which here means a hoodie and occasional hat:) Time to set out twinkling lights. Time to gather with friends and family. Time for traditions, cookie baking, Christmas music, hot cocoa, holiday movies, wandering the neighborhood checking out decorations. And Santa.

Ever since Lilly was born, we talked about this Santa dude. Were we going to play along, even mention him? Have him be a big part of the Christmas traditions, or merely a minute piece to the puzzle. Last year Lilly was still too young to even realize what was going on. Sure, she was delighted by the lights and wrapping paper but that was about it. This year, as she's nearing 3, was a completely different story. She joined me in watching some of my favorite movies: old school Grinch, The Santa Clause, Christmas Vacation (though SHE wasn't really watching this one). We read The Night Before Christmas. She learned the words to Jingle Bells. We decorated a gingerbread house. And from the movies and stories, she recognized the fat man. Good ole Santa Claus. To her, just another character in her make-believe world, just like Mickey Mouse, her bear, fairies, superheroes, Captain Hook, and whatever character she conjures up as her little imagination runs wild.

We didn't want Santa to be the one to get all the gift giving glory, while mom& dad gave the obligatory xmas pjs. Hell no! We want the girls to know that mom, dad, grandma, grandpa, & anyone else, gave gifts and that we're hard workers and that this gift exchange doesn't mean you can ask for tons of shit ad nauseam & expect a magical old man to deliver. It's about getting AND giving. Giving is my favorite part.

We plan on having zero part in threatening for good behavior in exchange for gifts from Santa. We want our kids to be kind and loving and trustworthy because it's the right thing to do. Because it's what we want. Not just this time of year. And not because Santa wants it!

We also didn't want to force the kids to have a visit with Santa. It was a tradition with us as kids, as it is many of our family and friends. But somewhere deep inside, I have serious issues with placing a screaming child onto a stranger's lap. I'm not forcing them to sit in a strange dude's lap when I'm trying to teach them not to talk to strangers! Or at least, not to go randomly sit on their laps. If, one day, we happen upon a Santa& either of the girls request a little chat with him, then we'll obligingly visit. Until then, it's not being forced. Or even mentioned.

What about the magic of Christmas? Without the Santa charade, this is still an exciting time of year. I don't remember when I stopped believing in Santa (maybe 2nd grade?) but I do remember still pretending in the 4th grade so my mom wouldn't be disappointed and to still play along for my little brother. Once I knew Santa was really my mom, it became even more magical. We would go to my dad's family xmas eve, do a big dinner, gift exchange and when we came home late that night, my mom would be in her pjs, listening to music, hint of JD on her breath (guess it helps for gift wrapping). The only lights on in the house were emitting from the glow of the Christmas tree. The tree. It looked like it puked up a plethora of shiny, colorfully wrapped gifts that spilled from beneath the green branches. My mom was always, and still is, good at making it seem like there are so, so many more gifts than there are. We got to open 1 gift and then my brother and I would share a room for the night so we could whisper in delight about all the gifts under the tree. And for one night, we actually got along. Now THAT'S magic!

So this year, Santa gave one big gift and the stockings. She was just as excited for those gifts as she was from the stuff from everyone else. And now, hopefully, Santa is on par with unicorns in her mind. Nothing more, nothing less. 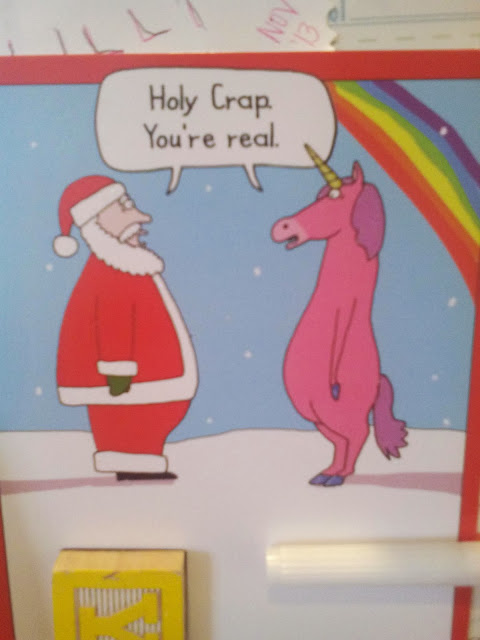