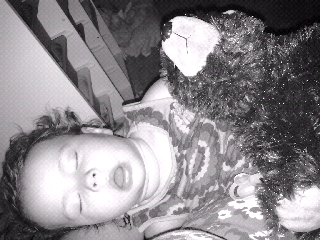 This past summer we hit a wall. A no-more-napping-for-the-kiddo-omFg-mom-is-gonna-lose-her-mind kind of a wall. I would rock her, sing to her, dance with her--nothing seemed to work anymore. Except for her falling asleep on me, while I was seated:/ Though it was nice to have the snuggle, after a half hour my ass would start to cramp. And with my ever growing pregnant belly, it was getting more & more uncomfortable. That's when a friend told me about the 90 minute sleep cycle.
What is it? Basically we all go through 90 minute sleep cycles or an increment of 90 (3 hours, 4 1/2 hours, 6 hours, etc).
I googled it and thought it might be a little ridiculous, but tried anyway. I originally was trying to put her down around noon-a time I thought sounded like a great nap time. Now I tried 3 or 4 1/2 hours AFTER Lilly woke in the morning to put her down for a nap. It didn't matter if it was only 10am. And holy shit! She was out like a light! No fighting Mr. Sandman, no crying, no crampy mom arms. I felt as though I'd found a miracle. Or some magic trick. Why hadn't anyone mentioned this before?! I started spreading the word to any of my friends with little ones that would listen to me.
It worked splendidly. Until this past month:(
5 days out of 7, she will not go to sleep. For me, at least. It's a conspiracy against me, I do believe. I have come to this conclusion because if Jeff puts her down for a nap, she cooperates! But for me? She'll lay down, but I hear her wrestling around for 10, 20, 40 minutes. Talking to her animals, kicking her feet, making noises-NOT sleeping. And when I go in there to see what the hell is going on, she usually has a present from me. That's right! I swear she can take a dump on command. Because it doesn't matter if she pooed RIGHT before I laid her down for the nap. She will save a little turd just for me so we start the whole nap process over again. But when her Daddy has her, there's no mid nap poop surprise.
What a little stinker!