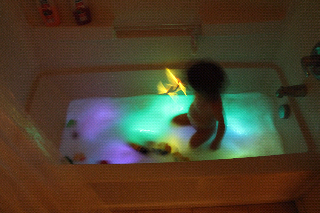 I hit 39 weeks tomorrow. Earlier this week I was contracting a lot and would've sworn that things were going to progress and we'd be holding a baby in our arms instead of still in my uterus. Alas, this baby is comfy and cozy and NOT gracing us with its presence anytime soon.  Or not too early, at least. Instead of "nesting" (which I think is a crock of shit), I have been trying to keep Lilly as busy as possible with new projects and fun things to do.  You know, before the baby comes and we spend the next month trying to sleep, yet still spend time with her.  I see a lot of Sesame Street and Dora in our near future.  OMG thank you Dora!  There is just something about that girl that Lilly adores and is mesmerized by.

She loves to color/scribble/draw. But I wanted to liven things up a bit and find some new ideas and activities for her. Where else would I turn, but to Pinterest! Earlier this week I made her some sensory bags, an idea I got here.  I filled a ziplock bag with shaving cream and put blue food coloring on one side and yellow on the other side so that once she squished it around she'd end up with green.  Jeff ended up enjoying this activity more than she.  Go figure.  The second bag I filled had clear shower gel (from hotel samples) and starry glitter.  Once she squished it around it became bubbly and the glitter and stars floated around.  She really liked that one! But...it didn't last long in holding a nearly 2 year old's attention and an hour of it was enough and I knew she wouldn't want to see these same bags again another day.

Back to Pinterest. I had pinned this awesomeness.  Fun things to do with glow sticks! Why hadn't I thought of putting them into the bathtub?  Grandma gave her a tube of them for Christmas this year and tonight was the perfect time to bust them out! The tub came to life and glowed so magically that the next time I take a bath, I want glowsticks in it too!  Sooooo much fun!  To avoid a meltdown from the fun ending, we let her take the glowsticks out of the tub and continue with the entertainment.  She had a blast playing her drum with the glowsticks and just running around in the dark room.  We HAVE to buy more of the sticks.  It'll be the best $1 investment ever! 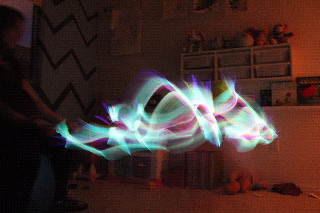 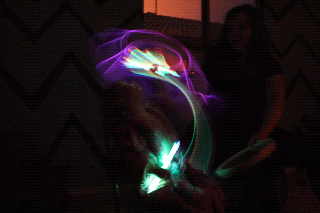