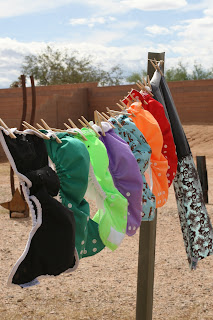 Before Lilly was born we decided we wanted to use cloth diapers. We wanted to produce less waste (disposables can take up to 500 years to decompose. That makes me want to throw up) and to save some money. Plus they are so stinking cute. In the summer there were days when she wore nothing but her cloth diapers. One of my old friends used them with her son & gave me info but it was all so overwhelming, though she gave us hope that this was the path we wanted to follow.  Our parents used them on us but that was SO long ago;) that the cloth diapers are no longer the same. I'm a hands-on kinda gal and REALLY need to feel these things in person. To see the real differences. To play around with them. I searched the internet ad nauseum, trying to find a local place that I could meander through and try to fumble through cloth diaper land. I found a local business called Ten Tiny Piggies, which is an online store only, but offers diaper classes for free. So, to the class we went! Before the class, I was completely overwhelmed with the options, the difference between AIO, One-size pocket, Pre-fold, or what those even meant. The class was extremely helpful and we returned home with a lot of knowledge but our heads spinning a bit. Once we let the info digest, we made our wish list. Part of the bill was payed for as a gift by Jeff's parents (THANKS!!) and we got the rest. The total was under $400.  It sounds like a lot up front, but over the course of time, I believe it is going to save us tons! We have used disposable diapers for trips longer than a day because doing dirty diaper laundry at someone else's house or at a laundromat is not very easy. I can't imagine the cost of buying disposables and wipes all the time.

We opted for 3 different styles and brands of diapers:

-Prefolds--old school kind that you fold into thirds, secure with a pin (though now there are other, safer fasteners like the Snappi), and then place a water proof cover over it. You can reuse the cover numerous times before it needs to be washed.

-One-size Pocket Diaper (Happy Heinys)--there is an insert you place inside of a "pocket" in the diaper. When the diaper is soiled, you change the whole thing just like a disposable. Oh--and it is called One-size because they can be adjusted throughout the waist and the length of the diaper, making it usable throughout the duration of the baby's diaper wearing days!

-One-size Diaper System (BestBottom)--These too are one-size. The thing we like the most though, is that they have an insert that snaps into the waterproof shell. It gets soiled, you unsnap one insert, snap a new one in and voila--You're done!

Each diaper has pros & cons but we're glad with the decision in what we've chosen.
We do have to wash the diapers every 2 to 3 days so our water bill may have increased, but not anything significant. And since we are blessed with an average of 284 days of sunshine, we linedry everything.

Also, after a few months we started making our own wipes.  We just cut up some receiving blankets and use a mixture of water, baby wash & baby oil.  They work like a charm. And knock on wood, she has yet to get diaper rash and we don't use any creams on her.

The only downside that I've found to the diapers is that we have to change her diaper more often. They aren't as absorbent as disposables, so as soon as she pees once she wants that thing off asap! That actually may help her to potty train faster since she doesn't like being wet.  Hey, a girl can dream right?!