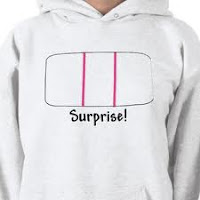 It's been one week that I've officially known that someday, I will be called Mom.

I took the 1st test while Jeff was at work & immediately freaked the fuck out because I've taken like a gajillion preggo tests in my life and never once has one been even remotely positive.  The urine usually speeds right past the 1st window on the stick to the 2nd window, blurting out the thick, single line meaning NO.  Before we talked about being ready to have kids, I would always secretly hope I got a negative reading.Once we talked about adding onto our family, I went into the pregnancy tests with a neutral feeling.  I've never cried or been sad at the negative reading.  I always just assumed that's what I would continue to see, as I pissed on a stick simultaneously pissing away money to EPT.  I just figured I would need some assistance getting pregnant.  The thought of taking fertility drugs & thus possibly having a litter of children at once is not very appealing.  After all, I'm a human, not a dog--which is what I'd feel like after birthing 6 kids at once.  Just sayin. But we pseudo tried for numerous months (try since about October).  We weren't all insane about it, checking basal body temps with me ravaging him because I was ovulating.  No!  We just sort of stopped being careful.  No more pearl necklaces for this girl;)

After pacing the living room, oh...about a thousand times, Jeff finally came home from work & then I took the 2nd test.  That too, was positive.  But it was such a faint positive that I thought maybe I had gotten a faulty 3 pack box of tests.  It sounded just like my luck, after all.  So I did what any girl would do, I consulted with a knowledgable person in this realm--one of my besties.  After all, she has 2 kids so she HAS to know whats up with this pregnancy test.  Right?!  After telling me that I have now entered the Denial Stage, and that I was indeed pregnant, she recommended to "take the 3rd test 1st thing in the morning.  If it helps ease your mind.  But you're pregnant.  For real."

So I did.  And it was the same.  We told our families and some very close friends but I didn't want to announce it to the world until we got an official word from the doctor, because I was obviously still swimming deep in this denial shit.  Last Tuesday I went to the Dr's.  The nurse, after I told her I had taken 3 tests already, laughed at me & said with dead certainty "you are pregnant, but we still want you to take a test here".  How was everyone so damn certain I was knocked up when the preg test box says it's only 99% accurate?  I could totally be that 1%.  Duh!

But once the words flew out of that chicks mouth that I was indeed, with child, it really began to sink in. We've been on cloud nine ever since.  Even though it's only been a week, it already feels like an eternity.  Good thing noone has really been around us this week because we've been that obnoxious couple that won't stop talking about it.  We're both giddy with excitement, but also realize this is going to be such a huge rollercoaster ride of change.  My little alien (I've dubbed it this because it is so insane that there is this little poppy seed size thing, sucking the life out of me, growing exponentially & will soon come bursting out)--is only a little over 4 weeks.  ONLY 4 WEEKS! I'm so happy to know so early so that I'm not boozing it up & so I'm taking better care of myself.  But really, it's crazy to me because most people I know didn't find out until the 2nd or 3rd month.

Now, if we could only hurry up and find out if we're having multiples! After all, twins run in both of our families.  Yikes!!

Update: After going to the doc for our 1st checkup they said even though conception happened 4 weeks ago, I am considered to be 6 weeks pregnant since they start counting 2 weeks after your last period and it's all a guessing game anyways considering pregnancies last from 37-42 weeks.  So, the baby will be here sometime in march--you know, when it feels like it;)
Posted by amy rae at 18:21