Being true to my procrastinating self, I haven't written in a while.  It's not due to lack of things to ramble about.  I have plenty of shit to babble about.  The main reason is that I was out of town.  We went to visit family, see my youngest sister graduate from high school and went to a wedding.  We were gone for what felt like a month but in reality was a week & a half-ish.  My crackberry is usually glued to my palm when I'm at home, but during our trip there were numerous days where I only checked it once before going to bed.  I have no issues with disconnecting from my virtual world, blogs, texts & social networking all included.  There were a couple of times when I thought about pecking away a blog on my phone, but then quickly came to the realization that I'd rather daydream out the car window/share smiles with old familiar faces/gaze at the waves lapping at my feet while at the lake/fill in the blank. 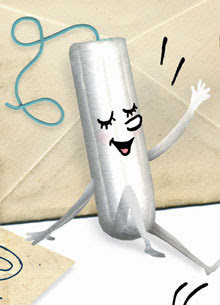 For a little TMI, I haven't had my period since March.  No, I'm not pregnant!  I apparently suffer from Amenorrhea, which is missing periods.  I guess I use the word "suffer" lightly, because it's not too bad of a thing to have.  I mean really, who wants a period every. single. month?!  Not me! Women take birth control that lets you not have a period every month.  Some women are envious of me. The major drawback is that I may not be able to get pregnant or may have difficulty doing so, but that's another post in itself.  The other setback is that since I skip periods I never know when I'm going to get the next one.  Sure, sometimes I get warning signs, but other times I'm just Niagara Falls without forewarning.  I have to carry tampons with me at all times.  The past few times I've had it have been during very inopportune times!  A nude cruise doesn't go too well with a tampon string dangling about.  The next time was while visiting a friend--being a crabby, bloated bitch doesn't make for an entertaining guest.  This time, I was at a wedding.  That's right--I had my period during our trip.  I started a day before the wedding (which was also the day of my bday)--the day I was set to wear not only a dress, but a very light colored dress.  Fuck fuck fuck! Besides the inconvenient flow of unwanted blood gushing from my nether regions, my period wasn't so bad the 1st day so there were high hopes of it being a mild menstruation.  Enter day 2 & the day of the wedding.  I woke up with what felt like Freddy Krueger mutilating my ovaries.  Then I sobbed & cried 3 months worth of extra estrogen out of my tear ducts.  I felt so bloated & unattractive and was loathing the thought of putting on a dress and smiling.  Then I took a Midol.  Hallelujah for drugs!
Posted by amy rae at 23:50