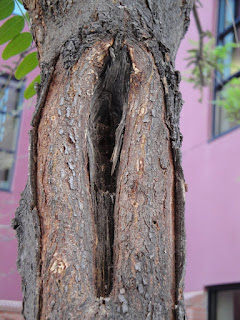 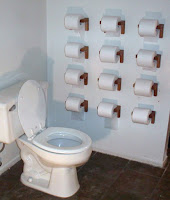 When nature calls, I normally have no problem answering. Even when I have to use a public restroom. I'm not one to play the game of being coy and pretending I don't shit.  Yes, I am a woman.  No, I do not magically digest my food in some super-human way where it dissipates from my body without gracing the depths of my bowels.  Anyone who can really do this please let me in on your secret because not having to go to the bathroom would be really sweet!
I know some people that can barely go pee, let alone drop a deuce, in a public bathroom unless it's spic and span.  I, on the other hand have no qualms whatsoever with going pee--whether it be a toilet, clean or dirty, or outside.  I'm not some freak that enjoys people watching me, but if I have to go, I HAVE TO GO! I'll take the slight chance of splashing a little on my foot as I'm popping a squat as opposed to holding it in agonizing pain until a suitable porcelain feature can catch my flow.

Going No. 2 though is a different story.  Happily, I've never had to do THE Do outdoors.  To my recollection.  If I have, I've erased that from my memory bank. I tend to have a sick & twisted sense of humor at times and rarely get offended.  However, I don't do shit jokes.  It's not funny to me, I don't want to see anyone going, I don't want to smell it and I really don't want to hear it!  Peeing--I don't care if a friend is in the bathroom with me or if the door is open.  Shitting--I don't want anyone within a 5 foot radius of the door.  And if there's no fan to block out noise? I slightly panic.  I've been known to turn on the faucet to drown out possible sounds.  Not like anyone is sitting outside with their ears pressed to the door to listen to me drop the kids off at the pool.  But you never know;)  So, you can imagine how I felt when I was at school and had to go.  "Hmmm...it's during class so there shouldn't be a bunch of people in there, I can go real quick and be on my way" was what the voice inside my head said.  So being true to myself and going because I have to, even though I may not want to, I headed for the stalls in hopes that I'd have a few minutes of alone time.  WRONG! I swear I must have picked the busiest damn bathroom on campus.  These broads were coming in and out so often I was beginning to think I may be holding up some line that had recently formed.  Then one girl came in.  Then silence.  It was just her and I, sitting there, waiting for a toilet to flush or someone to cough or a couple people to come in and talk & create a diversion.  Silence.  "Fuck! I just want to get this over with already.  Why is there no music in the bathroom? What kind of place is this?" So I do what any normal woman would do--I flush and go as it's flushing.  I'm sure it's blatantly obvious I'm droppin' bombs when I'm constantly flushing, BUT. I. DON'T. CARE! Relieved that I was finally relieved, I was washing my hands and said woman came out of her stall, smiled and commented on my shoes.  At least she had a focal point to take her mind off the awkwardness.
Posted by amy rae at 19:52 No comments:

just put a plug in it! 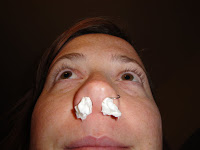 is what I've looked like all freakin' day!  Even though I'm enjoying the beautiful bounty of flowers & blooming things the desert is showing off, I'm not enjoying the allergies that come with them.  I'm allergic to Arizona! Seriously.  I've had an allergy test done and almost every tree, grass and plant that grows here tickles my nose and scratches my eyes.  It's so unfortunate because I absolutely love it here.  I'll take the allergies dammit.  Today has been by far the worst day.  As the histamine pummels through my system I try to ignore my body being invaded from the outside-in.  You see, I don't like to take medicine unless absolutely necessary.  I don't get sick very often and when I get the sniffles I just deal with them, drink lots of H2O, maybe drink some Immune Boost tea and hope for the best.  This usually works.  The only sickness I usually suffer from is the occasional hangover & being that it's self-inflicted I suppose I can't really count that.  Stupid wine!  But now I feel as though the meak & easily ignorable allergy is morphing into some monstrous cold.  Boo! Looks like I'm gonna have to kick this cold in the ass the "normal" way and take some drugs.  I have a lot of homework, a 4.2 mile run tomorrow--Pat's Run, (which will most likely be me walking fast and almost passing out when I attempt to jog), a visit with the family and studying.  I can't keep having people stare at me while I have this shit shoved up my nose.  By the way, it's making my nose appear to be very, very bulbous, which it is NOT! The constant changing of my "plugs" is wearing down our TP supply and they don't seem to be helping. Ugh...they're saturated and the ooze is fastly approaching my top lip.
Posted by amy rae at 21:36 No comments:

My car broke down recently.  The beast.  It may have to be put out of its misery.  It's been in the shop for a few weeks, initially suffering from a mysterious ailment, with a recent discovery that it may be a pricey fix (for our budget at least).  We have a long history, the beast & I.  After all, it's the 1st and only car I've ever owned.  I bought it in 2000.  It has been very kind to me, taking me across numerous countries.  After all, I had this car when I lived in Phoenix, Guam, Germany, Spain and now Tucson.  It has seen more of this earth than most people.  The beast has been neglected and abused by many, not just me.  The following are highlights from its adventurous and arduous existance:
The red beast saw me through my 20's--literally, almost the whole decade! It's no wonder the thought of junking it, because honestly, noone in their right mind would actually buy it, is so bittersweet.  I love my car, with all of its flaws.  From the front bumper that's held on with safety wire (no thanks to someone else), to the cracked dash that I have to pound with my fist to get the speakers to properly work, to the missing wheel stud & broken glove box that's been removed for about 8 years now so "I have more leg room", to the peeling window tint, to the sun baked splotchy paint job.  I love it all!  I feel as though I am getting rid of a limb--a very neglected, beat up & shitty looking limb.  But the thing that I love the most about my car (& that I'll miss dearly) is that it's paid off! Geez! I'm really not looking forward to buying a new vehicle.  Shhhhh.....I hope the beast didn't hear that.
Posted by amy rae at 23:50 No comments: