You Can Have Your Cake, But You Can't Eat It:(

In my cake decorating class we had to make a cake for our midterm, decorate it and turn it in. I guess it's being sent to the fair for judging. I'm not sure though because I don't fully pay attention in class--just being honest. As is always, I procrastinated until the day before it was due, causing myself a slight bit of stress and lack of my nightly Zzzz's. After I baked the cakes, I went to the store to purchase stuff to make the icing. When I returned home, I noticed that my sneaky dog had reached up on the counter and nibbled away a large chunk of one of the cakes. Chocolate, mind you! Chocolate is bad for dogs. She's okay.
Here is the culprit: 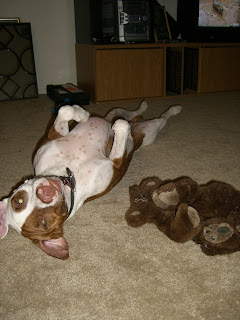 With a face like that, I couldn't be upset with her. After smelling the delectable aroma wafting in the air, I'd probably climb up on the counter for a quick taste too!
So it was back to baking. Then making two different icings. Then coloring them. Then assembling & frosting the cakes. It was then I knew I had make a mistake. Instead of going with a tried & true, yet disgustingly tasting frosting recipe my teacher had given us, I decided to use a new scrumptious recipe. NEVER use something new on a project. NEVER. The minute I put the frosting on the cake I knew I was going to have problems. It slowly started to slide down the cake. I tried putting it in the fridge so it would harden, but I knew after sitting around at the judging table it would end up a catastrophe. Oh well--can't change it now! So I did everything as quick as possible and this is what I ended up with: 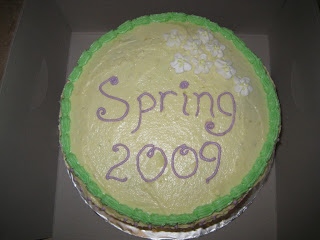 Simple, yet pretty I think. (there are pink & purple polka dots all around the sides)

The next morning was a bigger fiasco than my sliding icing. We were to turn in our cakes by 9am. My teacher never showed! I honestly wouldn't have expected less from her. About half the class waited and waited and waited--about 2 hours! The school didn't even have a contact number for her. How lame is that?! Finally we got someone to open the doors so we could drop off the cakes. In spite of the fact that my cake probably now looks like a 4 year old made it, I better get an A for waiting around for her douche-bag ass.

Oh--and I found out that the cake isn't even going to be eaten! So realistically I could've decorated a piece of styrofoam and used the extra thick, gross frosting recipe from my teacher. Damn it! I could've saved the yummy cake for me!